Edward A. Rollins was born in Wakefield, NH in 1828.  He spent his formative years in Great Falls, NH and entered Dartmouth College at the age of nineteen. Graduating from Dartmouth in 1851, he entered the legal profession in Great Falls and in 1860 was elected to the NH state legislature where he twice served as Speaker of the House.  Moving to Washington he accepted the position of cashier in the new Bureau of Internal Revenue in 1863, ultimately becoming its director. Rollins moved to Philadelphia in 1868 as the President of the National Life Insurance Company, and subsequently he became President of Centennial National Bank in whose service he remained for the rest of his life. During this period he took an interest in railroad and other business enterprises, acquiring considerable wealth.

At the same time, Mr. Rollins took his civic and religious responsibilities seriously and was known to employ his wealth generously.  He was a member of the Sessions (governing board) of the Walnut Street Presbyterian Church in Philadelphia, and his gift of the chapel to his college was not the first of his benefactions. The chapel was erected as a tribute to his father and mother, Daniel G. and Susan Benny Rollins and to his wife, Ellen. Due to illness Mr. Rollins was unable to attend its dedication.  However he was present at the first service of Morning Prayer ever held there.  Five days later on September 12, 1885, Mr. Rollins died, and was honored at the Chapel’s first memorial service.

An organ was installed in the Chapel in 1887 as a gift from Harold C. Bullard ’84; it was subsequently enlarged by him, and in 1918 parts of that organ were incorporated into a new instrument donated by Frank E. Streeter, LLD ’74, a Dartmouth Trustee.  In 1963 the Streeter organ was replaced by the present Austin organ given by Basil F. Austin ’31, a life-long devotee of the design and construction of high-grade pipe organs. 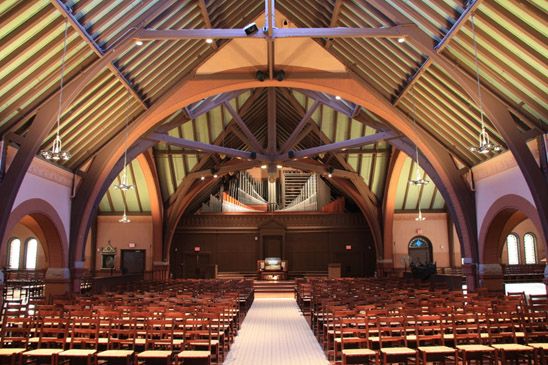 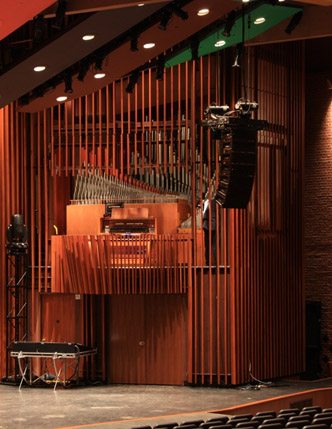 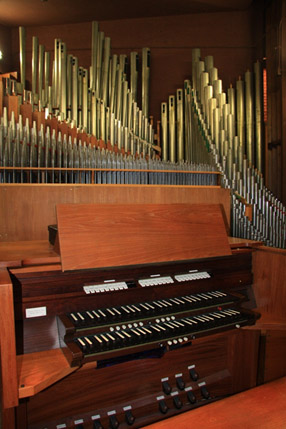 The Hopkins Center, designed by Wallace Harrison, the architect of Lincoln Center and the United Nations Building in New York City, has served as the cultural hub of the Dartmouth College campus in Hanover, NH, since it first opened in November 1962. In 1988 the “Hop” was named by the National Endowment for the Arts as one of the nation’s exemplary performing arts centers, with live performances in virtually all genres of music, theater and dance, film screenings, and other events. The Hop also houses classrooms, studios and other facilities, as well as the offices of the Departments of Music, Theater, Film & Media Studies, and Studio Art. 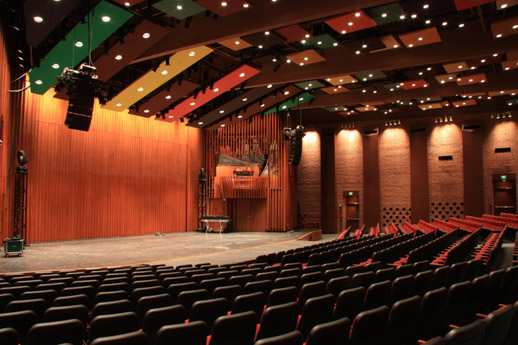 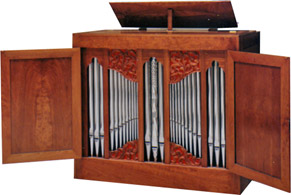 A portable chamber organ, housed in a handsome paneled case of antiqued cherry with a façade of pure tin diapasons and hand carved acanthus leaves.  Keyboard compass C-d’’’, 51 notes, playing at either 415 or 440, easily transposable.  The keyboard is high enough to be played comfortably while standing and conducting, yet low enough to allow the player to see the conductor over the music rack whilst seated.  All the interior pipework is of Sitka spruce for lightness, durability, and that special late 17th, early 18th century English sound.  The scaling and voicing is reminiscent of the work of Smith, Bridge and Snetzler.  The Open Diapason commences at tenor f whilst the other four stops divide into treble and bass between middle c and c sharp at 415, b and c at 440.  The blower is self-contained and in its own case.