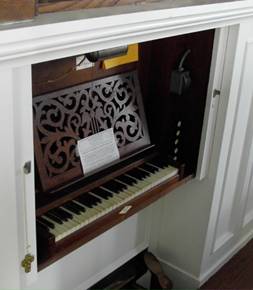 Pictured above is the quaint and compact one-manual console of the Sunderland organ. The lace-cut music rack was a trade-mark accessory of the Odell firm at the time of this organ’s construction, includes a lyre in the center of the pattern, and has been used to confirm the origin of an instrument restored elsewhere. The diamond-shaped nameplate in the thumb rail is that of the builders; the rectangular plate above the music rack records the gift of the organ. (The Church has tried to research the identity of A. J. Johnson, donor of the organ; but as of this writing, that remains unknown.) The expression pedal, barely visible in this photograph, is raised on the treble end of the flat, straight pedalboard.

Pictured to the right is the double-rise wind reservoir, with twin feeder bellows below (but not visible), in our shop for strict restoration of all leathers, construction, and operation. The split of the inverted hinge in the upper rise was the failure, in June 2003 – after 132 years, that incapacitated the organ and mandated the releathering project, which was studied very thoroughly and competitively by the Church.

The condition of the reservoir was as it had served in the church since 1871, save for having been vacuum-cleaned once or twice. The screw eye to the left is a connection to the regulator valve in the wind line from the Spencer blower. The black metal arms are part of four evener devices that keep the top- and mid-frames floating in parallel on these double-rise reservoirs. The accumulation of the ages is apparent on the top frame, although one panel has already been removed in the shop. The reservoir is weighted with an array of fieldstone to regulate and maintain 3″ of water column wind pressure to the pipework. Partly for reasons of access inside the organ case, the cleaning and repairing of the Pedal chests and pipes were included in this releathering project, as well. 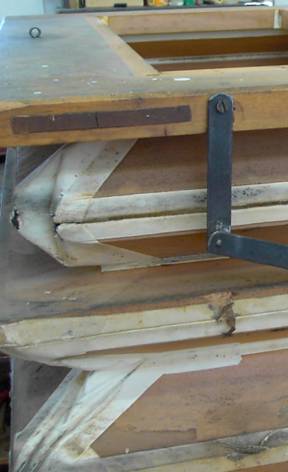 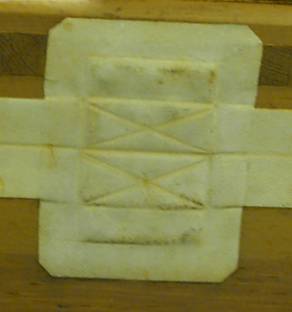 The picture above shows an over-patch to one canvas hinge strap of several supporting the feeder bellows beneath the double-rise reservoir. Note the hand tooling of this leather, from its exquisite, original assembly. The craftsmanship of the 1871 leathering work on this reservoir was the most exacting and elegant that we have ever encountered in our work, and was a challenge to replicate in our own attention to recovering.

Similarly, our Firm wished not to be responsible for the loss of any of the “historical voice” of this artifact in our hands, a prudent, if conservative, approach to restorative organbuilding these days. Thus, before beginning any dismantling work in the shop, we engaged Scot Huntington of Stonington, Connecticut as a Consultant to review the construction, details, and condition of this unit, as we were obliged to restore it under strict, historical guidelines. Copious notes and photographs were taken that day, giving a fresh and thorough outlook upon our responsibilities for the work ahead, all overseen carefully in this firm by Richard M. Frary, Jr.

The finished product is shown below, before being returned to the organ. All the leather used was sheepskin, of various grades and finishes. Everything was assembled with premium hot hide glue. The wood surfaces of the reservoir, hinges, feeders, etc., were all scrubbed clean, and only sanded lightly, if really needed. Places that were worn from stepping, paint or dirt intrusion, or similarly, were wiped lightly with shellac. Then, all wood surfaces were treated with coats of a British preservative wax. Every piece of leather, and every shape, cut, and assembly, were made to replicate, as closely as possible, the materials and methods of original manufacture. Though fresh in appearance, and durable of construction, this wind system was reworked to look just as it did when the Odell firm delivered it. The rocks are back in place; the reservoir is leveled in operation; and the hand-pumping mechanism is available. 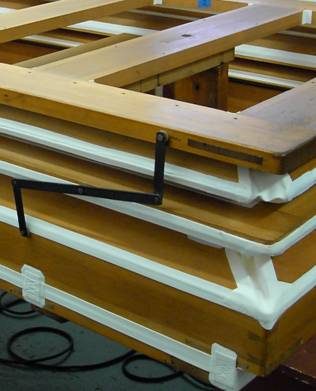 SPECIFICATIONS OF THE PIPE ORGAN

Console left side, listed from the bottom upwards

Bellows – Signal to the organ pumper, secured in place, although hand-pumping is now restored

Open Diapason [8′] Bass 15 pipes en-façade, balance enclosed; forward edge of the languid of the CC pipe (center pipe in façade) is stamped “T. Robjohn” by Thomas Robjohn, a Voicer for the Odells

Dulciana [8′] Tenor C rank; forward edge of the languid of the Tenor G pipe is stamped “T. Robjohn”; in 1974, Messrs. Czelusniak et Dugal removed the Dulciana pipes, along with their original rackboard, into storage within the organ (where they remain), placing on the main windchest a Clarinet 8′ [Cremona, Tenor C, 46 pipes] rank of 1868 Steere & Turner, Westfield, Mass. manufacture, removed shortly before from the First Congregational Church, Hatfield, Mass.

Console right side, listed from the bottom upwards

Pedal Bourdon [16′] Chests and pipes divided on both sides of the main chest and expression enclosure, within the casework

Principal [4′] forward edge of the languid of the CC pipe is stamped “T. Robjohn”

Fifteenth [2′] forward edge of the languid of the CC pipe is stamped “J. Fackler” (Joshua Fackler)

This organ was previously cleaned, maintained, and fitted with slide tuners by Allen E. Hastings of Athol , Mass., prior to Czelusniak et Dugal beginning work here in 1974. A small Spencer blower had been added by 1940. The altar reredos was lowered by 1980 to give the organ clear tonal projection.

The change of Dulciana to Cremona was executed with care, to be completely reversible, which precluded a proposal of the same year, by others, to enlarge this organ through the addition of a Mixture IV and Trumpet 8′ on all-electric chests, on the sides of the case, to increase the power of the organ, especially to support the hymn singing of the then-growing congregation.