Inauguration concert by James David Christie, on Sunday afternoon, May 16, 1992 augmented by the Second Church Chancel Choir and Soloists,
with Charles D. Beeler conducting a chamber orchestra.
Dedicated formally in worship service on Sunday morning, May 30, 1993.

The Ernest M. Skinner Company of Boston originally furnished this Chapel with a three-manual organ of twenty-three ranks, their Opus 179, dedicated with the Chapel on February 13, 1912, situated in matching oak cases carved by Irving and Casson of Boston, displaying block tin façade pipes in the north and south bays of the chancel.  The organ was replete with foundation tone and some orchestral voices, but very tightly packed into the shallow and high chambers.  Tonal projection from this position was so advantageous, that E. M. Skinner later showcased this installation in his 1917 book, The Modern Organ.

By 1970, the original Skinner Chapel organ had fallen into disrepair and disuse, owing partly to water damage and also to normal deterioration from age.  Rebuilding, executed between 1972 and 1974 by Berkshire Organ Company, Inc., West Springfield, MA, reduced the instrument to three divisions and sixteen ranks.  Playing connections to the Main Church organ were severed, but service access to the Chapel organ chambers was greatly improved; the façade pipes were restored and polished.  Berkshire Organ Company’s tonal scheme in the Chapel imitated a bright, classical palette.  Since the musical pendulum has swung away from a preoccupation with North German Classical organ and tonal design, renewing appreciation of Romantic tonal qualities, the work seemed increasingly to have been comprised only of a limited offering of exaggerated sounds which challenged any player for pleasant registration and convincing renditions of repertoire.  The three-manual Skinner console was retained, as were some original windchests, though all were severely altered in the rebuilding.  Unfortunately, the organ suffered water damage within a few years of this rebuilding.

Our firm had restored the organ located in the main church, 1979, and maintained the instrument in Skinner Memorial Chapel, repairing water damage to the organ there on several occasions.  The tonal characteristics, many unreliable actions, and further effects of water damage justified the need for another complete overhaul of the instrument.
With the enthusiastic urging of Charles D. Beeler (Minister of Music at Second Congregational Church from 1984-1992) and the continuing generosity of the Skinner family in the Church, a major project in combination with necessary building restoration was envisioned to reconstitute the pipe organ in the Chapel.  Considering the historic, bountiful, and authentic E. M. Skinner tonal resources in the Main Church, the design requested by C. D. Beeler for the new Skinner Chapel instrument was to be in the G. Donald Harrison Æolian-Skinner style.  For authentic resources, to replace pipework lost during the last redesign, the Church purchased Skinner Organ Company’s Opus 324 in the War Memorial Building, from the City of Holyoke, February of 1990.

In July 1990, approval of the firm’s contract to reconstruct the Skinner Chapel organ was finalized, again with four divisions and enlarged to thirty-four ranks.  The project offered a fascinating challenge to the organ builders, and the result would provide a churchly instrument sympathetic to the heritage, acoustics, and applications of the Chapel, yet in great musical contrast to the Main Church organ.

The Great Principals were new; the Swell chorus was of 1950’s Austin pipework obtained from the Church of the Transfiguration, New York City.  The Great and Swell mixtures were designed for Skinner Chapel by William F. Czelusniak and are similar to those on worksheets of the Æolian-Skinner firm, recomposed and enlarged from ranks remaining with the Berkshire Organ Company rebuild in Holyoke and with the New York City Austin organ, respectively.  Most flutes and all string and reed ranks, with some structural materials and expression parts now in use at Skinner Chapel were restored and incorporated into the Chapel instrument from the Victory Theater/War Memorial Skinner organ.  Mayland Elite Chimes from the original Skinner Chapel organ have been retained and renovated, as were the Pedal flue ranks.

Main manual windchests using pitman and unit electro-pneumatic systems, much like those of Æolian-Skinner’s work, have been custom-designed and constructed for this installation and unit windchests for offset basses and the Pedal stops were rebuilt from the Holyoke organs.  The 1910 Skinner console, returned to its original position in the Chapel, completely rebuilt with solid-state switching, relays, combination action with eight levels of memory, and additional accessories, while retaining all original claviers and surrounding woodwork.  The Great and Choir divisions, Chimes, and Pedal trebles were installed in three levels in the north chamber, the Swell Pedal bass pipes forward for the enclosure, and the upper Swell shade frame was custom-built to fit the stone arch of the organ bay.  Richard M. Frary, Jr. supervised the firm’s rebuilding and installation work.

While this rebuilding project did not look back centuries for design and tonal examples, it was nevertheless historically inspired and may best be characterized as a contemporary interpretation of G. Donald Harrison’s reconsideration of an E. M. Skinner organ. 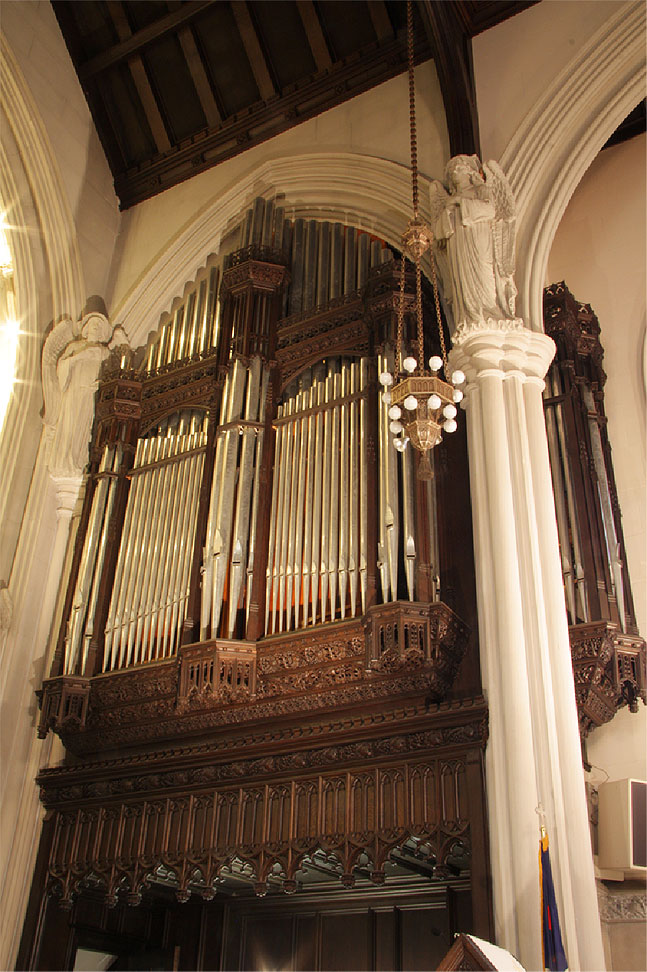 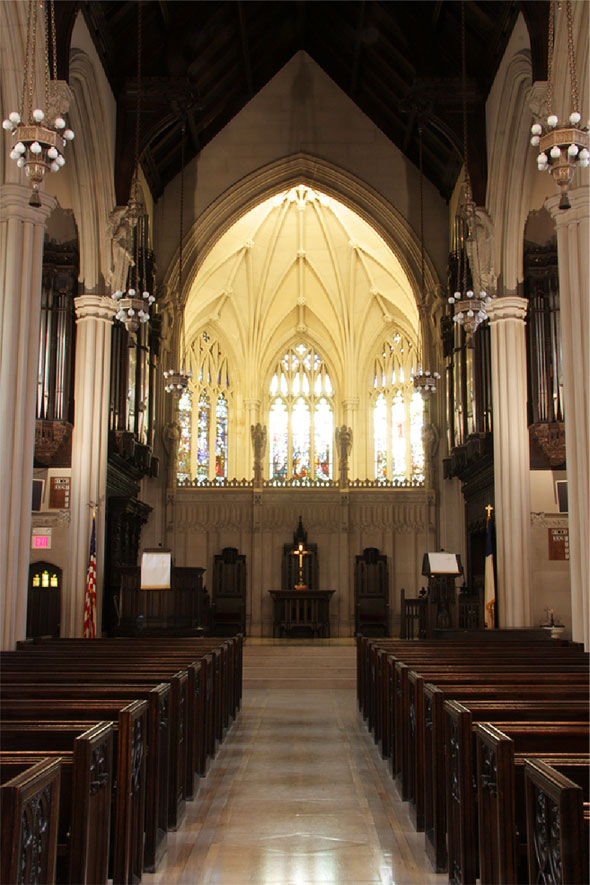