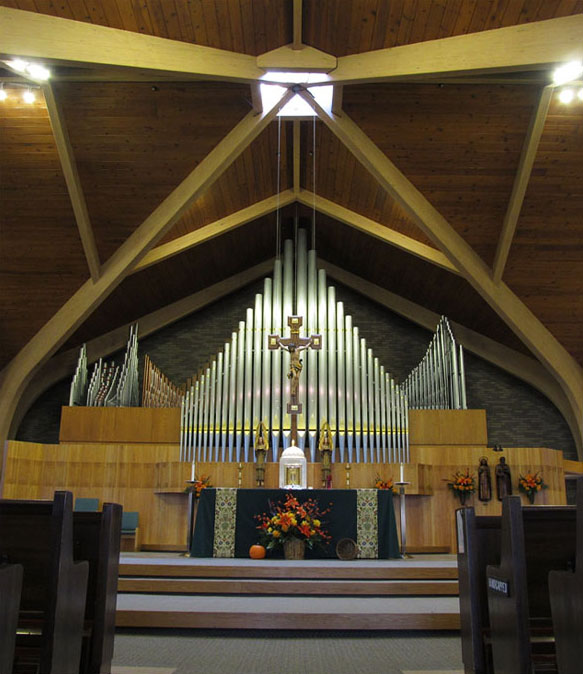 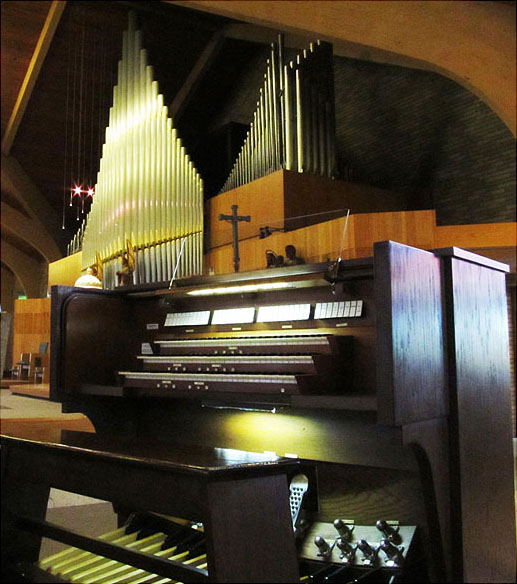 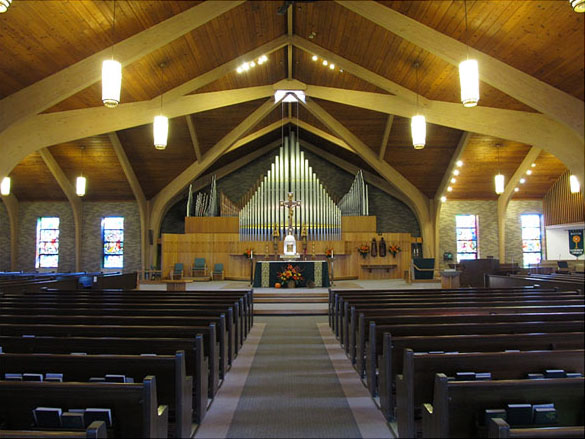 Installation of the pipe organ in Greenfield was completed on Friday, March 14, 1986, in time for the Easter season!

The story of the pipe organ at Blessed Sacrament Church begins in the Berkshire town of Lenox, Massachusetts in the 1960’s.  Lenox was the home of Cranwell School, a private preparatory school for boys, established, staffed, and operated by the Roman Catholic Society of Jesus (the Jesuits).  A sprawling summer estate with manor house, all given to the order in 1939 by Edward Cranwell of New York, formed the campus and was developed and expanded through the years.  Another generous gift to the school allowed for the design and construction of the Pierce Memorial Chapel.  Displaying contemporary architecture, the elliptical structure features individual ribs of reinforced concrete with stained glass windows between them rising toward a central round tower, producing an amphitheater-like room focused on the main platform and altar table below.  The Chapel was completed in 1967, with the installation of a magnificent pipe organ on a platform, above the Chapel entrance.

The instrument installed was Opus 2932 of Casavant Frères, Limitée, St-Hyacinthe, Québec, Canada and boasted forty ranks of pipes on three manuals and pedals with electro-pneumatic playing action.  The façade of the organ was formed from pipes of the Pedal Principal stops of 16’ and 8’ pitch, though a short wall blocked sight of the mouths of the display pipes.  The sides of the instrument displayed the Pedal Subbass stop and a skirting of oak casework.  The manual pipework was free-standing behind the façade.

After a stressful period of financial difficulties, the decision was made to close the school in 1976; however, the inspirational sanctuary continued to serve the Catholic community until 1985.  The Cranwell campus assets where then liquidated to a corporation of real estate developers in Pittsfield.  The Provincial of the Society of Jesus in Boston was insistent that the pipe organ be relocated to a Roman Catholic parish church within the Springfield Diocese, so that many of the area donors might continue to benefit from the influential Cranwell institution. So, the instrument itself was retained by the Jesuits for a separate sale.  Bids as high as $85,000 were entertained for the very-desirable Casavant organ;  but, the Society of Jesus agreed to sell the instrument for $25,000 to Blessed Sacrament Church, Greenfield, in May 1985, because the Parish met the essential criteria for relocation within the Diocese.

As early as 1982, Paul F. Roy was hired as Organist in Greenfield, to develop the music program and for the purchase of a pipe organ to replace their ailing and inadequate electronic instrument.  For the Blessed Sacrament Parish, the quality and reliability of a pipe organ were also a prerequisite to attract, inspire, and maintain a capable musician and, similarly, to lead and develop the congregation in various musical styles of worship.  Barbara Richardson began work as Music Director for the Parish in the autumn of 1984, and by the spring of 1985, the Music Committee had learned of the sudden availability of the Cranwell Casavant.  Co-pastors Fr. Timothy Campoli and Fr. William Cyr, with Barbara Richardson, confirmed through various consultations that the Casavant was an outstanding instrument in excellent condition and of appropriate size for the Greenfield church.  The layout of the organ for reconstruction was arranged by Messrs. Czelusniak et Dugal, Inc., in cooperation with John F. Bednarski, of Bednarski-Stein Architects, Inc., Greenfield, to fit the space available in this church, and for best appearance, tonal projection, and serviceability.  Ample funds were raised by the parishioners to cover the church renovation and pipe organ installation;  and, site work began after New Year’s Day, 1986.

Church renovations required for the pipe organ included special heating and electrical provisions in the new pipe loft, and relocation of choir seating on the main floor, near to the new console placement.  The assembly of the organ by Messrs. Czelusniak et Dugal, Inc. began Monday, February 3rd and was completed on Friday, March 14, 1986, in time for use during the Easter season.  Tonal regulation and fine tuning were completed at the end of April.  The original façade was rearranged successfully to conform to the shape and space of the Church;  and the original casework was refinished and refitted for the new location, with minimal effort – a very simple transplant of a custom-built pipe organ!

The relocation of the pipe organ from the disparately different room in Lenox to the Greenfield sanctuary did not require any revoicing of the organ.  The power, quality, and balance of the instrument remained in good proportion in the new location, though some may feel that the overall effect or some subtle qualities of the pipe organ heard in the former location may have been compromised by the acoustical qualities of the Greenfield installation.  The silvery high tones or shimmering qualities of the organ, supported and enhanced by the hard, concrete surfaces in Lenox, are somewhat reduced now.  Greenfield is a more intimate setting, softer and more absorptive;  but, the pipework is closer to the player and to the congregation, here.  The sound may seem warmer, more robust or broader, and more present in a room where spatial qualities are more restrained.  This outstanding musical instrument loses no value nor refinement under these circumstances;  but, neither does it require any alteration or enhancement.

The installation of Casavant Opus 2932 into Blessed Sacrament Church, Greenfield, is an exemplary project for the preservation of valuable pipe organs, while improving the musical assets of a Parish, with efficiency and economy.  All  circumstances in this opportunity converged fortuitously to allow for the support of worship with music, for musical expression, and for Parish outreach with concert presentations, as well.  This story is a wonderful celebration of the human spirit for the glory of God!